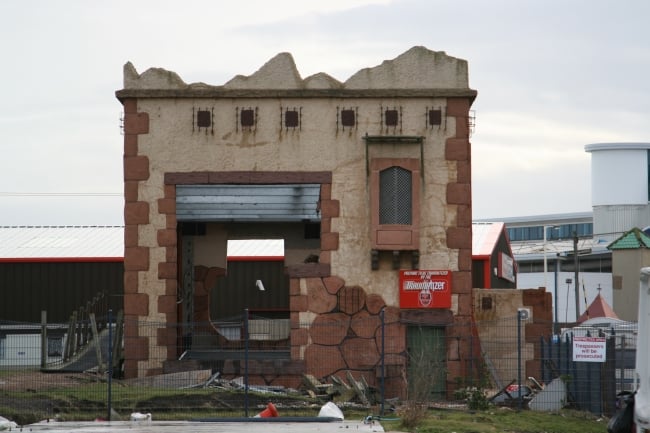 On 5th September 2006 Pleasureland in Southport closed its gates for the final time after 93 years of trading. The park opened in March 1913 and was originally located on the Kings garden site before moving to its current location. The park was named pleasureland during the 1930s when a Ghost Train and the cyclone wooden roller coaster were added.

During the war like most parks Pleasureland was used by the air ministry as a plane park and the following decade brought some more expansion when the fun house, giant slides and the joy wheel were added.

1998 was the year of the parks biggest investment when Traumatizer a Vekoma SLC (suspended looping coaster) was purchased and installed for 5m, at the time this was the only ride of its type in the UK the park also opened Casablanca’s family entertainment centre and restaurant.

More investment followed in recent years the park refurbished the Lost dinosaurs of the sahara ride and added a new £300,000 entrance.

Now its January 2007, Traumatizer has been relocated to Pleasure Beach Blackpool and is currently been built as Infusion a water themed ride, the Cyclone coaster has been demolished and various other rides have been sold to other UK parks.

What follows is a few photographs of the park in its present state, all photographs were taken on Sunday 7th January 2007. 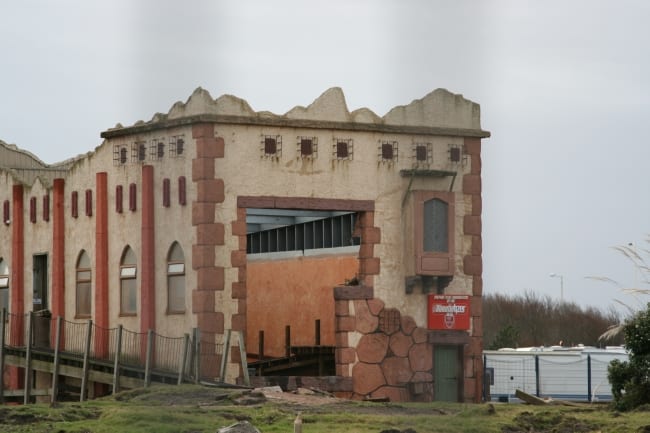 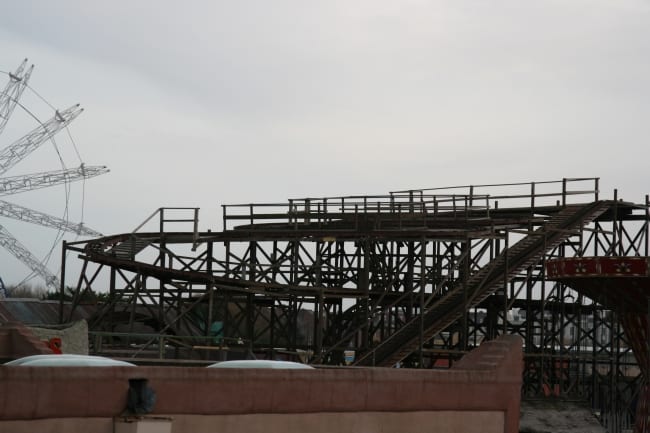 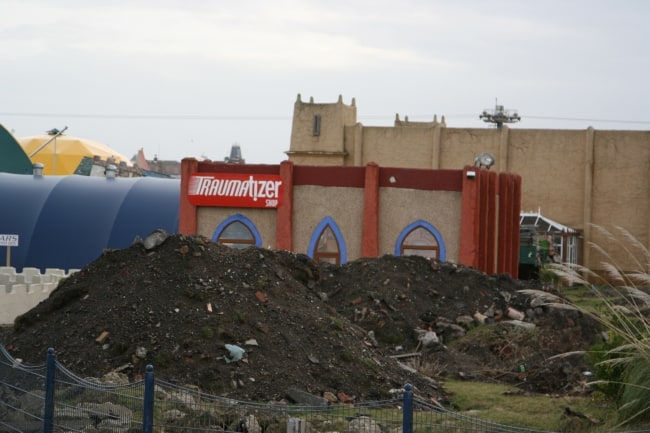 A piece of cyclone track.

What was the cyclone lift hill and first drop. 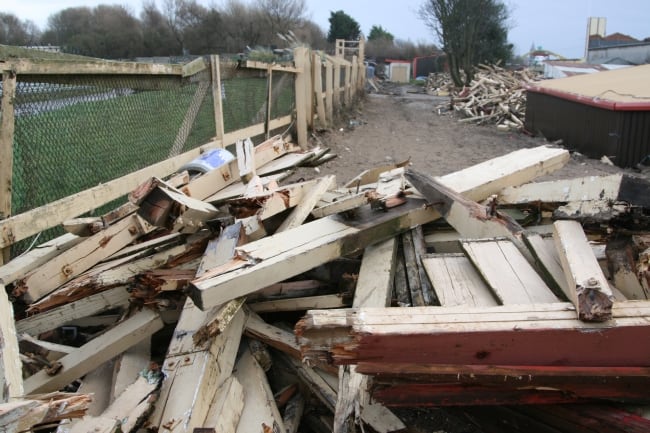 Cyclone timber is all over the place. In the distance the Chewits log flume still complete. 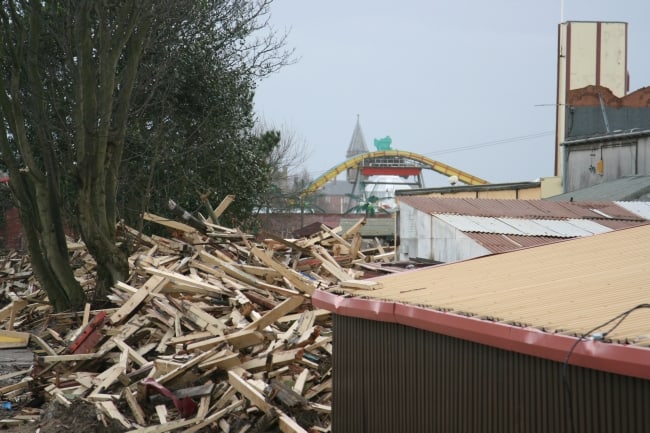 The Cyclone ride building on the left and the greenhouses are all intact. i didnt notice any newts ;-). in the background the pirate ship ride. 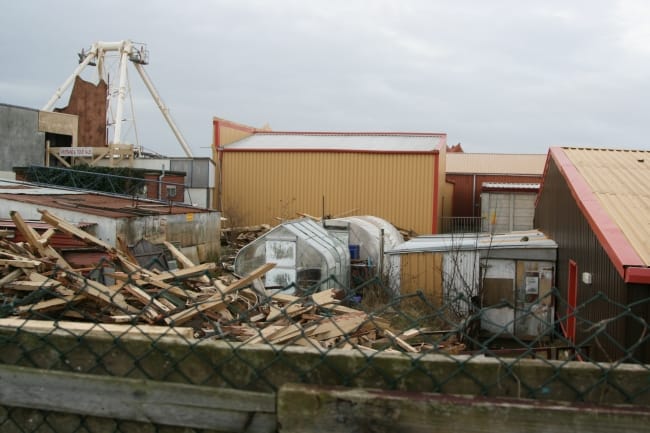 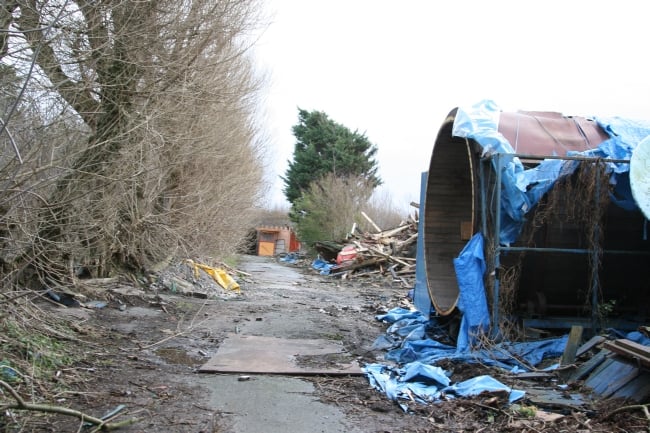 The steel coaster at the front of the park has been removed. on the left the skyride station is still complete and the gondolas sit at the side of the ride. 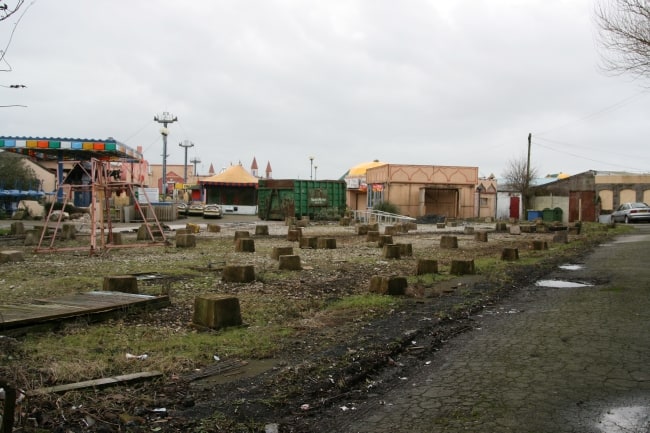 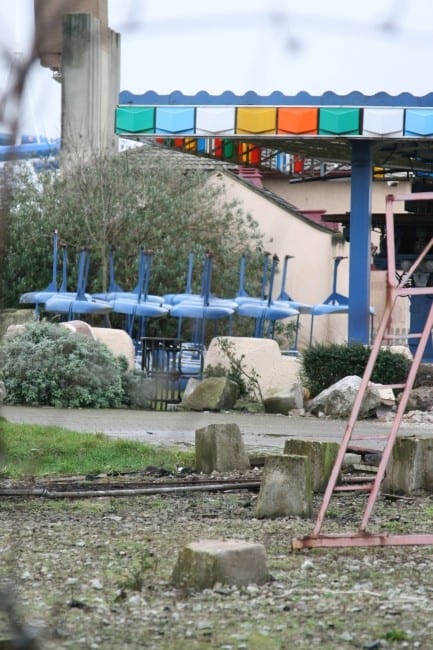 Log flume cars standing idle next to a huge skip.

Dinosaurs of the Sahara. 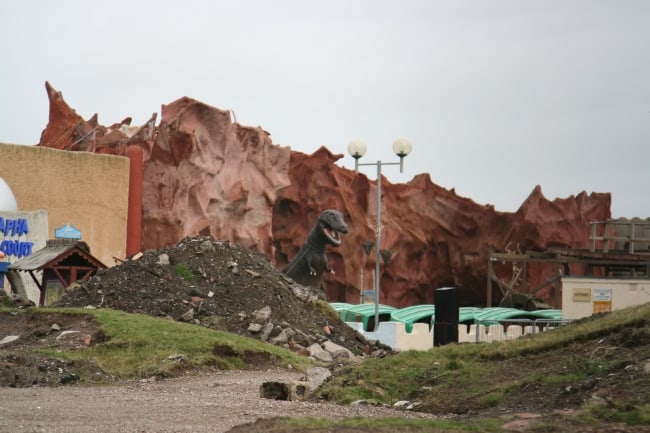 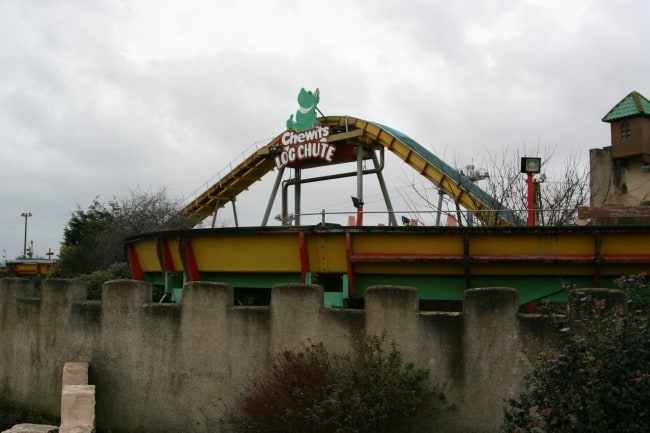 A small pool on the crazy golf in front of the log flume, it wont be long before its chav’d 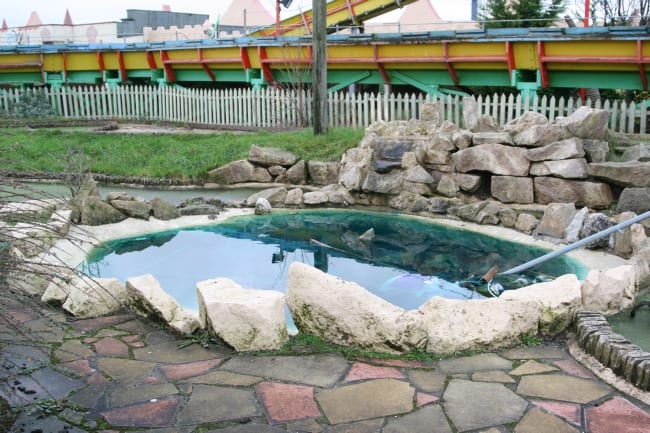 Heres a timeline taken directly from the Pleasureland website.

Pleasureland was opened in Kingís Gardens, Southport, in 1912 with a Helter Skelter and figure eight rollercoaster. By 1924 the addition of a water chute, boats on the Marine Lake and a Hiram Maxim Flying Machine meant the park had outgrown its site and the rides and attractions were re-located to the parkís present site on the beachfront.

River Caves, Caterpillar, and two wooden coasters – The Scenic Railway and Mountain Caterpillar, both of which sadly no longer with us. In the 1930ís the park was re-furbished, the Ghost Train and Crazy House (now the Haunted Inn) and Cyclone wooden rollercoaster were added and the Park was given the name ëPleasurelandí. However, the Second World War meant that amusement parks and other activities took a back seat as the country devoted its resources to the war effort. As a result Pleasureland was closed during the war and the site was used by the Air Ministry as a parking ground for aircraft, fuselages and wings shipped over from the USA. After the war Pleasureland was re-opened and soon regained its pre-war popularity.

As post-war Britain got back on its feet, so did the leisure market. Pleasureland in the 1950ís saw a boating lake, a completely re-built Fun House (originally called the ìHouse of Nonsenseî) and the Queenís Horses (now the Gallopers) and Bowl Slide were new attractions to the park. The Bowl Slide being for many years the only one of it’s kind in operation in Britain. During the 1960ís came the 1001 Troubles Mirror Maze and Haunted Swing, both still operational and enjoyed by our present day visitors as ìAbdullahís Dilemmaî. Other rides added during the ë70ís and still retained at Pleasureland include the Wild Cat steel rollercoaster and the Sky Ride cableway, whilst the the Pinfari Big Apple junior steel rollercoaster was added in the 1980ís. Many attractions are no longer at Pleasureland ≠ some were only ever here on a temporary basis whilst others have simply moved on or been sold. A few names include the Speedway, the Rainbow, the Hanseatic swing boat, the Hurricane Jets, the Astroslide and the Looping Star.

During the 1960ís came the 1001 Troubles Mirror Maze and Haunted Swing, both still operational and enjoyed by our present day visitors as ìAbdullahís Dilemmaî. Other rides added during the ë70ís and still retained at Pleasureland included the Wild Cat steel rollercoaster and the Sky Ride cableway. The Pinfari Big Apple junior steel rollercoaster was added in the 1980ís

The Log Flume, a major attraction for the park, was shipped over from Myrtle Beach in the USA in 1991 and rebuilt at Pleasureland. In 1993 Pleasureland created a young childrenís area called Sultan Towers incorporating 10 juvenile rides and The Moroccan Crazy Golf was built around the Log Flume at the entrance to the Park. During 1994 the council demolished their outdoor swimming pool and Pleasureland purchased the water chutes. The chutes were re-built on the Park, a hydraulic water system was installed, boats were added and the ride was renamed the Waterboggan. 1995 saw the addition of the Pavilion, a canvas dome which plays host to Pleasurelandís summer Circus.

In 1997 Pleasureland purchased the last remaining ride tenant on the park, and this finally paved the way for some major changes. With the tenanted rides gone there was not only more space available for new attractions, but also more freedom to rearrange the existing rides and make the best use of the space available. Four new rides were added this year, the Tidal Wave swing boat, the Bumper Boats, a new Ghost Train and the Mistral Flying Machines. Sadly the original Ghost Train was demolished due to the poor condition of the building, however many of the elements were transferred to the former Journey into Space ride which would become the new Ghost Train

For 1998 a Chance Chaos was brought to the park from America, the first Chaos in Britain and a fast and furious ride that flips and spins until riders donít know up from down! This was the first year of significant investment, with the addition of the Challenger Go Karts and major ground improvements. Work continued through the winter, with several rides relocated and refurbished to make room for Pleasurelandís biggest attraction ever..

Visitors in 1999 were greeted by the awesome sight of the TRAUMAtizer, the UKís tallest, fastest, suspended looping coaster, built at a cost of £5 million by the Dutch company Vekoma. Other new attractions included the Desert Camels childrenís ride and a junior Go Kart track. Pleasureland also opened its new entertainment centre – Casablanca, with bar, restaurant and games area. The following year saw the arrival of Pleasurelandís fifth rollercoaster – King Solomonís Rides, a wild ride in an out-of-control mine cart. This is another historic ride, having previously been situated at Morecambe Frontierland. The Fun House was refurbished, with new attractions and a new entrance, and all the parkís toilets received a major facelift!

In 2001 the park continued to grow and improve, with a new games plaza to replace some of the older buildings and extensive landscaping around the car parks and 2002 saw an exciting new attraction ≠ the Lucozade Space Shot, which launches thrill seekers 120 feet into the air! This was also the year that the much delayed Ocean Plaza development finally opened in Southport, bringing increased levels of trade to Southportís seafront.

Abdullahís Dilemma, a £250,000 walk-through attraction combining the Haunted Swing and 1001 Mirrors, was opened in 2003 by arch TV prankster Jeremy Beadle. 2003 also saw significant developments behind the scenes, firstly the leases on the last few tenanted properties expired, secondly Pleasureland acquired the lease for the land occupied by Southport Zoo. This increases the land available to Pleasureland by about 1/3, and brings with it much scope for development in coming years. As a result of the changes a new main entrance was built, whilst the River Caves was refurbished as the new Lost Dinosaurs of the Sahara attraction. The Desert Rescue ride was extended whilst Sandstorm was the new white knuckle attraction for 2004.

2006 saw Pleasureland announce 3 new attractions. The first of them being the 60ft Big Wheel, which unlike most conventional Big Wheel rides is also capable of spinning on it’s base, offering guests a 360 degree look out over the park. Chair-o-Planes were also added to the park, suspending guests by chains whilst rotating them at speeds of up to 25mph around the central pillar. Expansion also continued in the former zoo area as Pleasureland began the move in to the newly aquired land by introducing the highly popular Kombat Zone Paintball Arena. The arena is split into five sections allowing guests to take on five different scenarios. This arena is also available for private hire, and so adds further to Pleasureland’s reputation of being #1 for party venues! Expect to see even more improvements over the next few years, as Pleasureland continues to grow and expand.

is an independant website not affiliated to any theme parks or fairgrounds, the views expressed are my opinions. If you have any comments on this or anything else please email me at paul@ridemad.com