Its a small world – Disneyland Paris 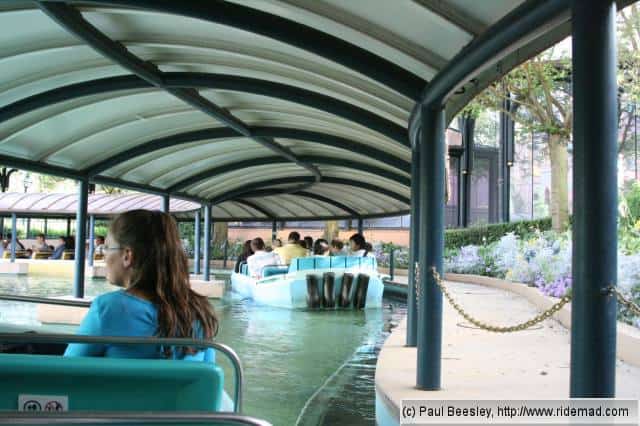 I visited Disneyland Paris in July 2008, we spent a total of 4 days on the 2 parks and 3 nights in the Santa fe hotel.

One of the many highlights for me of a trip to somewhere like Disney is the dark rides.

With attractions like It’s a small world and Pirates topping the list. This first set of photographs covers most of the small world ride, however some photographs and sets are missing due to the fact the ride is very dark in places and ISO 1600 on my camera is the best I have for low light.

Its a short ride and to me one of the great disney classics.

Before getting to the attraction here’s some history gathered from Wiki.

In 1956, Walt Disney attended a conference, along with many other notable celebrities of the time, at the invitation of President Eisenhower. The conference was about founding a national organization to help promote world peace through international civilian travel. (This dream became a reality in 1956, when Eisenhower founded the People to People Student Ambassador Program.) Inspired by the ideas from the meeting, Disney returned to California and set to work, creating the “It’s A Small World” ride at Disneyland.

Like several other Disneyland attractions, “It’s a Small World” originated with the 1964/1965 New York World’s Fair (it was Pepsi’s pavilion.) After the fair closed, the ride was transferred to Disneyland along with three other attractions from the fair that year; Primeval World Diorama, Great Moments with Mr. Lincoln and the Carousel of Progress.

The attraction’s design was done by Mary Blair, who was also an art director on several Disney animated features (including Cinderella and Peter Pan). Like many Disneyland and Walt Disney World attractions, scenes and characters were designed by Marc Davis, while his wife, Alice Davis, designed the costumes for the dolls. Blaine Gibson sculpted the animatronic figures, while Harriet Burns painted them. Many of the dolls were created by Joyce Carlson who is honored with a shop window along the Magic Kingdom’s Main Street U.S.A. The sign there reads: “Dolls by Miss Joyce, Dollmaker for the World.” Rolly Crump designed the Tower of the Four Winds (a huge structure controlled by the four winds, which stood at the entrance to the attraction at the World’s Fair).

The name of the ride was originally “children of the world”. When Walt Disney demonstrated it to songwriters Robert B. Sherman and Richard M. Sherman, the ride’s soundtrack featured numerous national anthems all playing at once. Disney said, “I need one song.” In response, the brothers wrote one of the best known Disney tunes of all time: It’s a Small World (After All). It is argued that the song may be the most performed and translated song on earth.

On January 22nd, 2008, Disneyland closed its version of the ride until November 29th for refurbishment. Rumors of removing the rainforest scene for a United States scene were squashed by a memo from Marty Sklar, but various Disney characters will seamlessly be added throughout the attraction, which has received mixed feedback.

In Disneyland Resort Paris, the ride is different from, but similar to, the other versions of the ride. The backgrounds and music are all different and there is a new room: a North America room, with dolls representing Canada and the United States. This version also has a complete Middle Eastern section in which the song is sung in Arabic. In the finale scene, the song is sung in German and English as well as French.

The song, we all know the song 😉

The well-known catchiness of the song is due not only to its constant repetition for the duration of the ride (which lasts about fifteen minutes, not including time in line), but Robert B. Sherman explains that the structure of the song may also play a role:

Like many songs, “It’s a Small World” has a verse and a chorus. One thing which makes this song particularly ‘catchy’ is that the verse and chorus work in counterpoint to each other. This means that you can play the same chords over and over again, but with different melodies. The repetitive, yet varied pattern tricks your mind into absorbing the work without it becoming tiresome to your ear.

Additionally, the World’s Fair version of the song is the one commonly heard on various Disney compilation albums. The song also inspired a Disney Read-Along.

The song was later given two covers for the dance video game Dance Dance Revolution Disney Mix: a Eurobeat cover by ABeatC All Stars and a Happy Hardcore instrumental remix entitled “IT’S A SMALL WORLD (Ducking Hardcore MIX)” by TOMOSUKE and U1-ASAMI, which featured sampling of Donald Duck and was the hardest song in the game. In Ecuador, this song serves as a theme for the chain of toy stores called Mi Juguetería. The original 1964 version of the song can be heard as one enters the store. 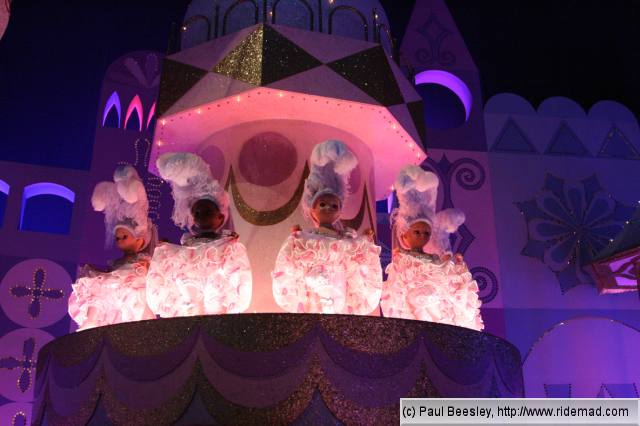 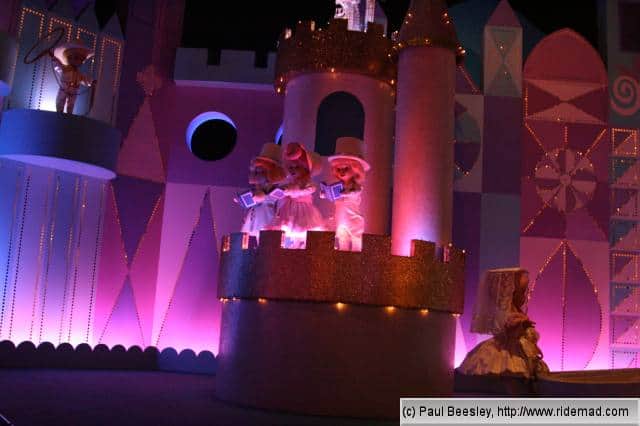 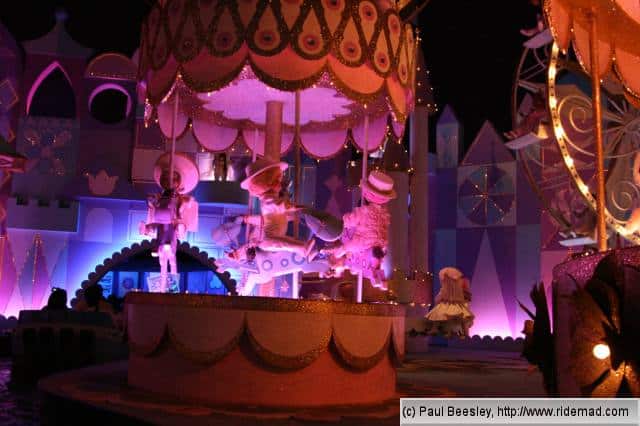 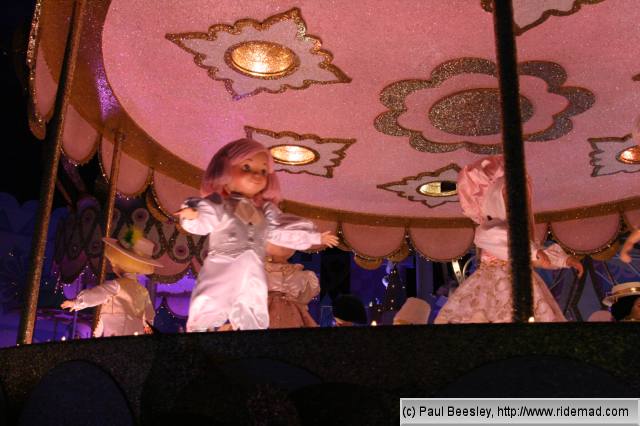 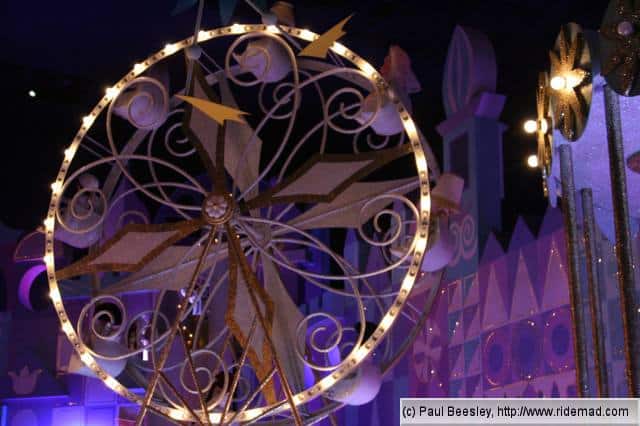 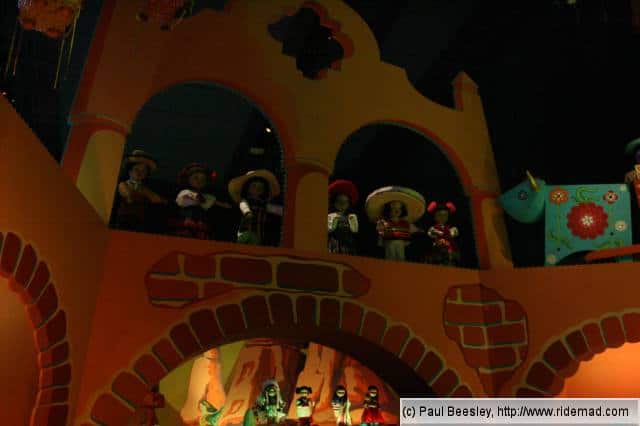 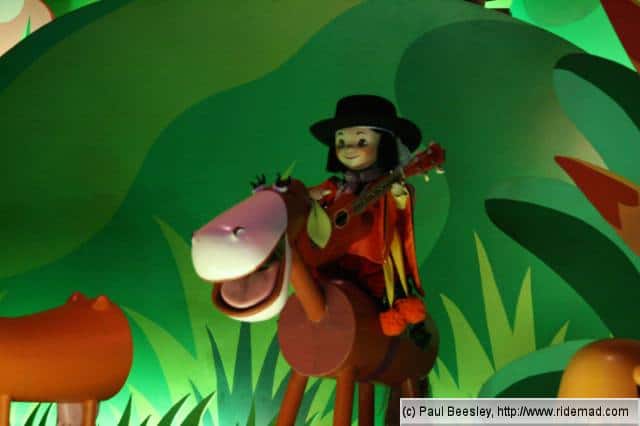 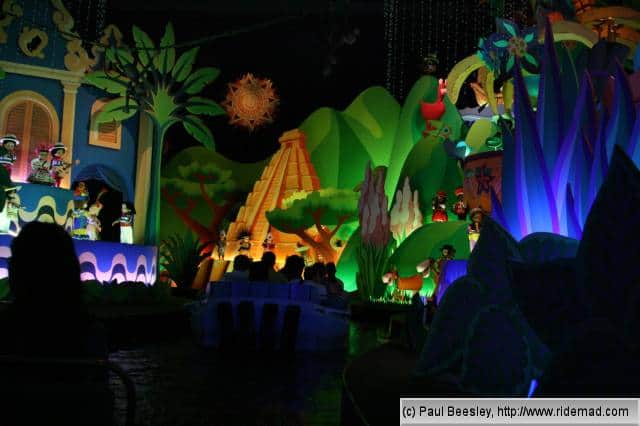 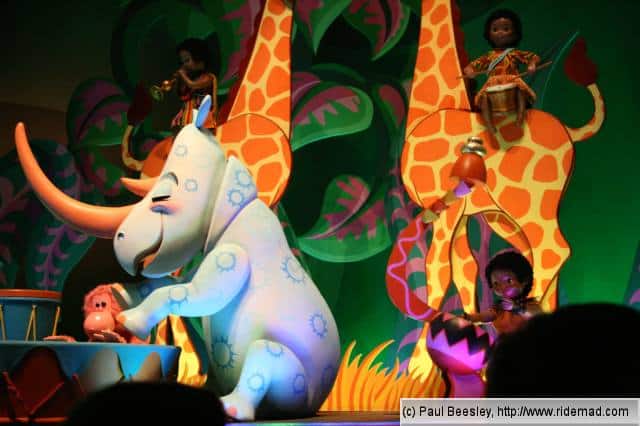 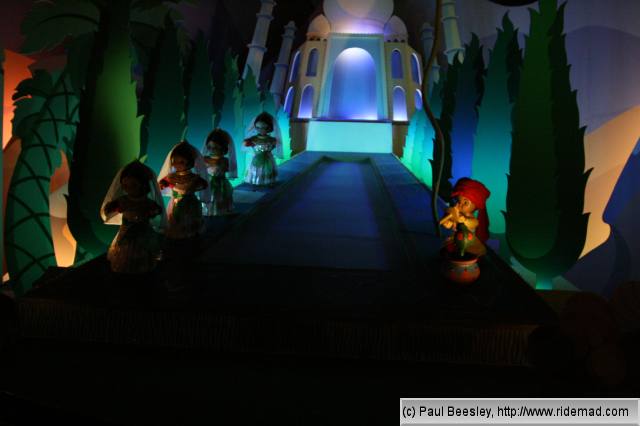 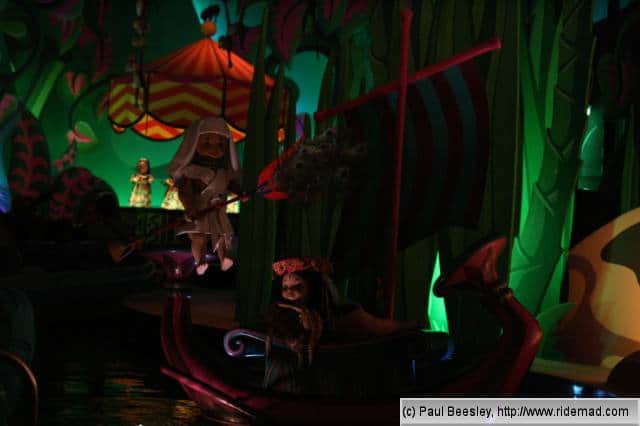 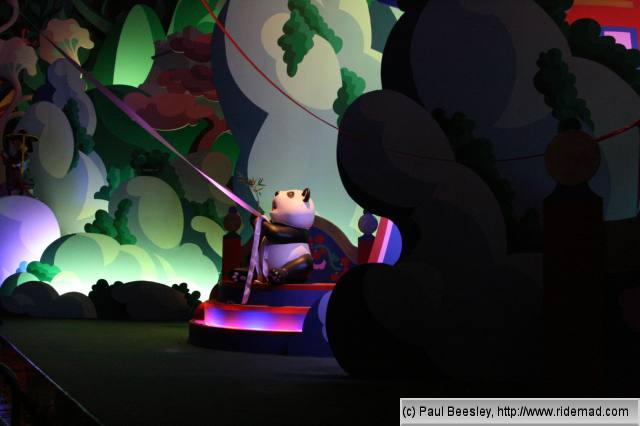 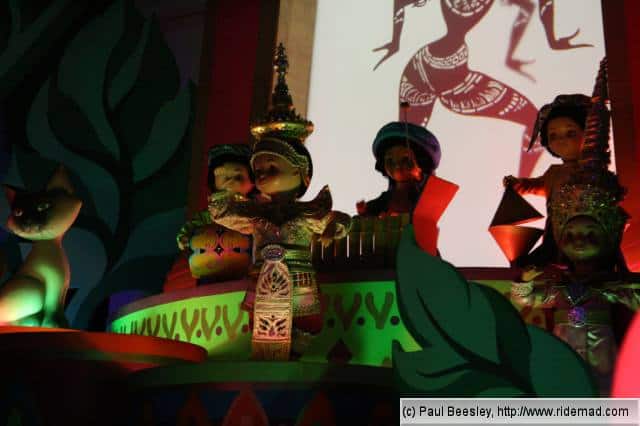 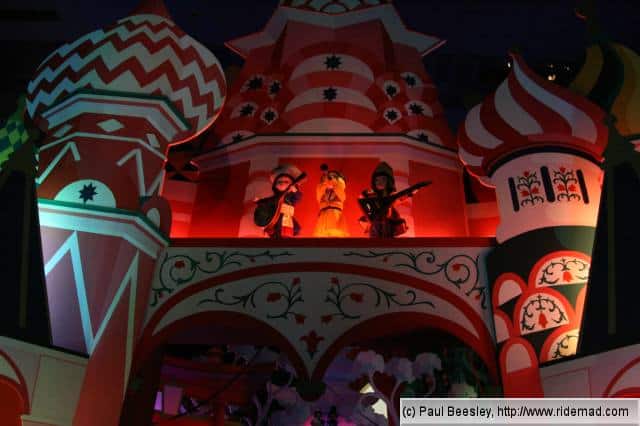 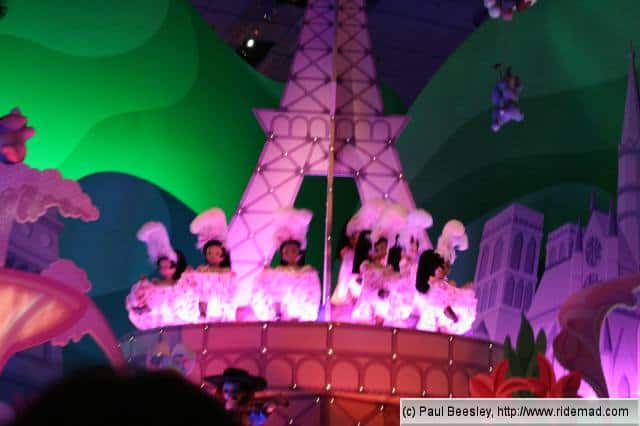 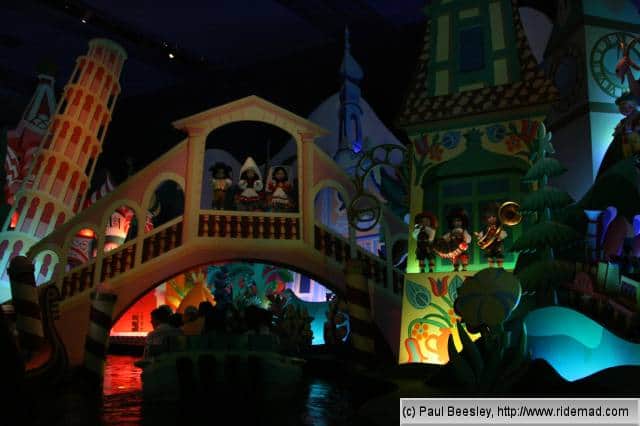 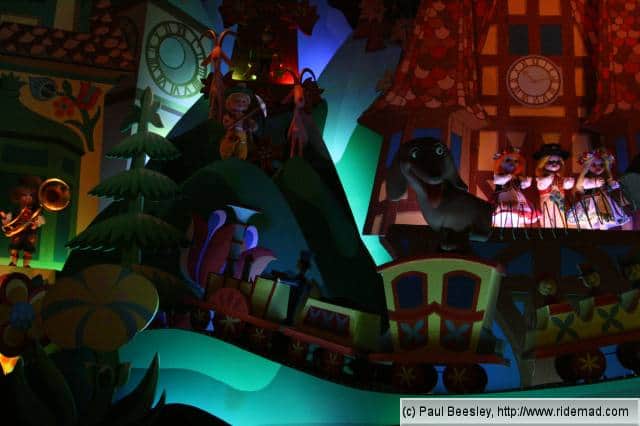 Want to discuss this further visit the forums