Folly Farm Pembrokeshire, A look at the past. 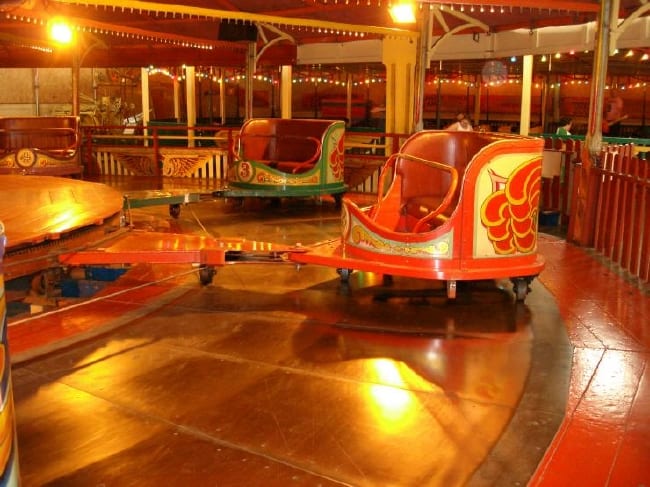 For anyone with an interest in vintage fairground rides a trip to Folly Farm is really a must. Not only is the farm packed with Animals it also houses the UK largest indoor traditional fun fair. The rides date back to the 1920’s and have all been lovingly restored and updated at the farm to meet current health and safety requirements.
Folly Farm is located in Pembrokeshire a short journey from Tenby and about 30 minutes drive from Oakwood.This article takes a quick look at some of the stunning attractions on offer at the farm and also looks at some of the history behind certain rides. I have got some of the history from a souvenir guide written by Brian Steptoe a leading fairground historian and the author of 2 books on the subject.

All the photographs are taken by me, but unfortunately I forgot to take a tripod, hence some of the pictures may be a little dark or over exposed. one problem with old fairground rides and the vast amount of lights is they play havoc with modern digital camera sensors 😉 ok so thats my excuse.

The folly farm chair-o-plane was built by German firm Gotha in the 1920’s. The first british owner was Jimmy Bond. Sam Manning travelled with them from 1962 through to 1985 when they were sold to David Smart and Barry Yeats before coming over to Folly Farm. The pictures dont do the ride justice as the lighting display is really stunning.

These rides were once called Arks as they originally had painted animals to sit on, this was altered in the 30’s and the name speedway come from the addition of the wooden motorbikes. 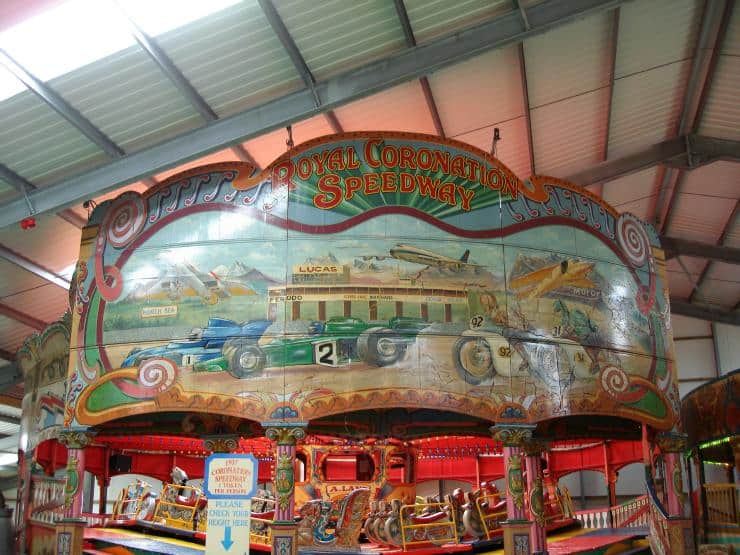 I remember been petrified of these as a child, i would hang on for dear life as the gaff lads would sit on the railing smoking and looking really cool, this is a beautiful example of the ride. no modern day plastics here. 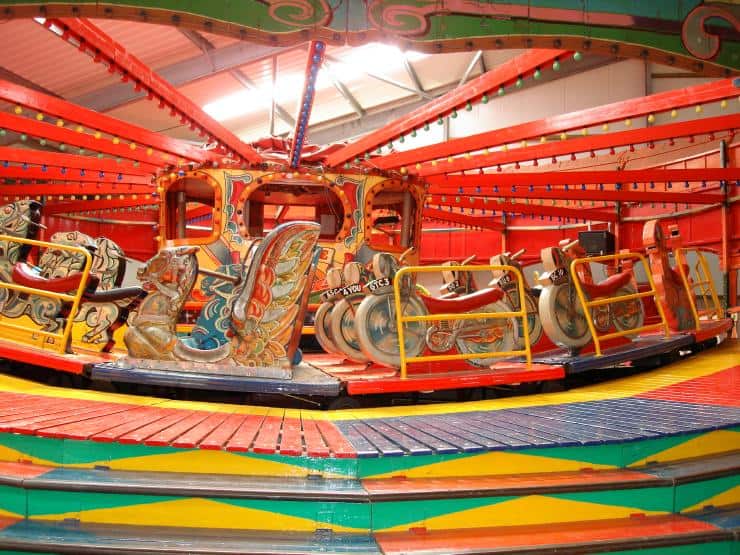 Here’s a close up of the bikes. 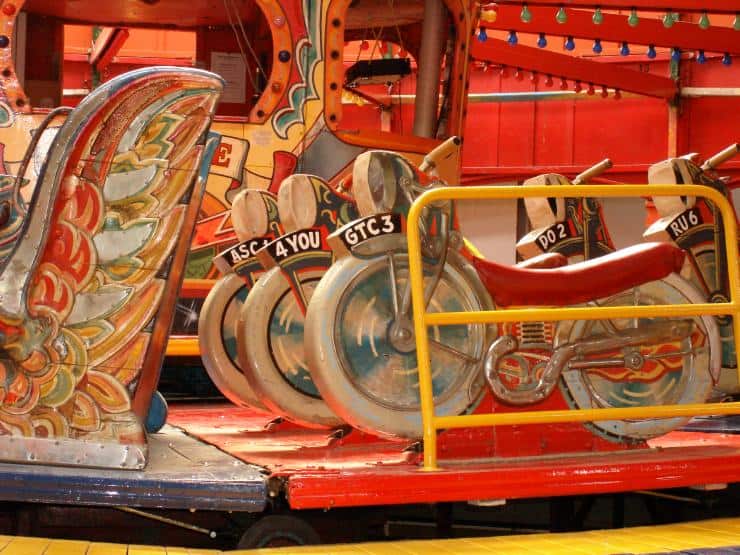 The ride was built in 1937 by the famous ride builders Orton and Spooner of Burton on Trent and is called the Coronation speedway in honour of the coronation of King George IV, the queen mother took a ride on this speedway and a symbol showing the extact bike is still on the ride today. The last owner before the ride came to Folly Farm was Harry Wigfield who travelled with the ride from 1977 to 1997.

A beautiful example of a Carousel. The set at Folly Farm were the last 3 a breast ride built by Savages and were delivered in 1922 to their first owner the showman Chris Johnson. This ride travelled until the start of world war two and was acquired by Billy Smart the famous Circus operator. 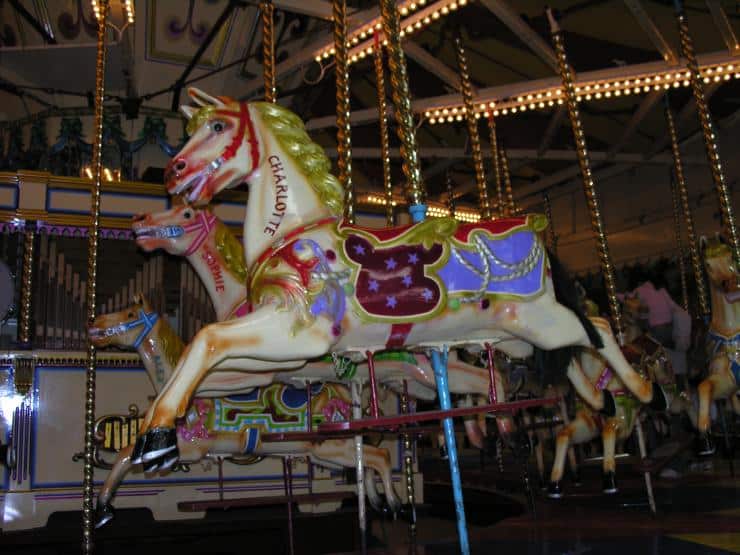 The ride was brought to Folly Farm in 1999. All the animals except one are carved out of wood.

The skid is a variant on the “whip” ride invented by Williams Mangels who was based near Coney Island in New York. This ride was built in the 1930’s and orginally belonged to William Nicholas, eventually after changing hands a few times it ended up with Peter Manning and at first the ride travelled, in 1984 it was placed in an amusement park in Southend-on-Sea and still travelled every year for the goose fair. You can still see the Mannings name on the pay box in the above photograph. 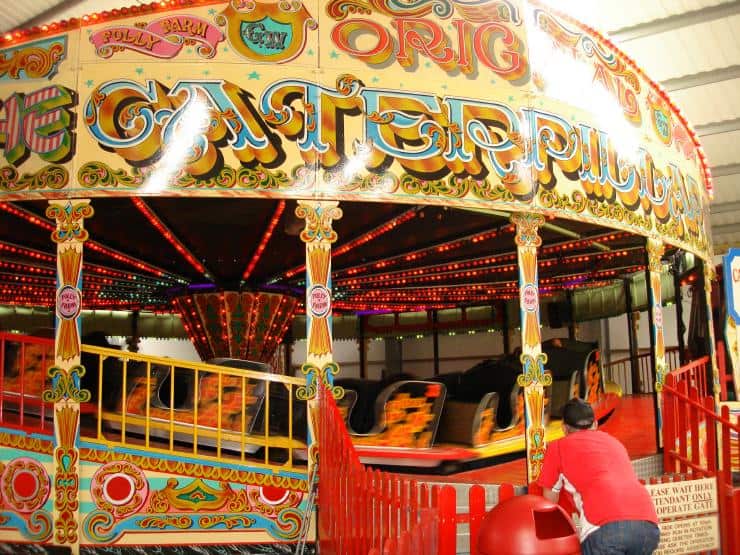 The Caterpillar ride was built in the 1950s for showman Henry Armstrong, originally this ride started life as a Toboggan ride with the sides of the cars shaped like toboggans. The ride was converted to a caterpillar style in 1955. 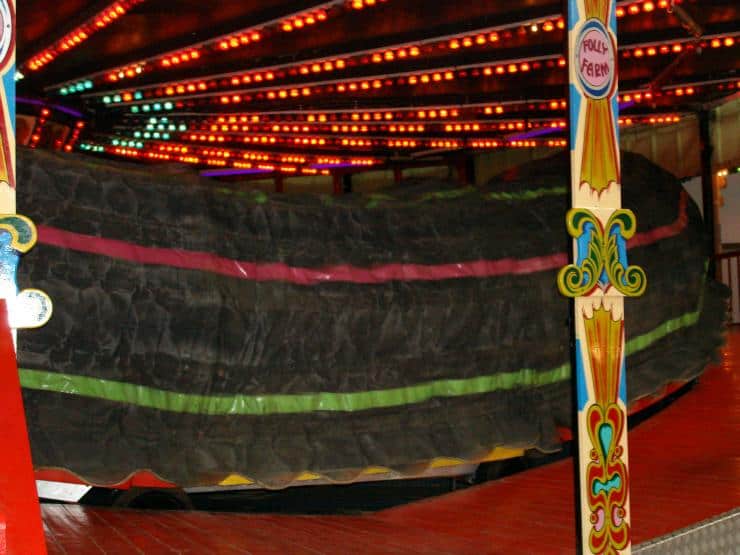 In 1974 it was owned by Jimmy Manning and he operated the ride until 2000 which at the time was themed on a dragon before coming to Folly Farm.

So what else is at Folly Farm.

Heres a few of my photographs showing the rest of attractions and rides at Folly Farm.

Lovely helter skelter, it was getting refurbished on my last visit. 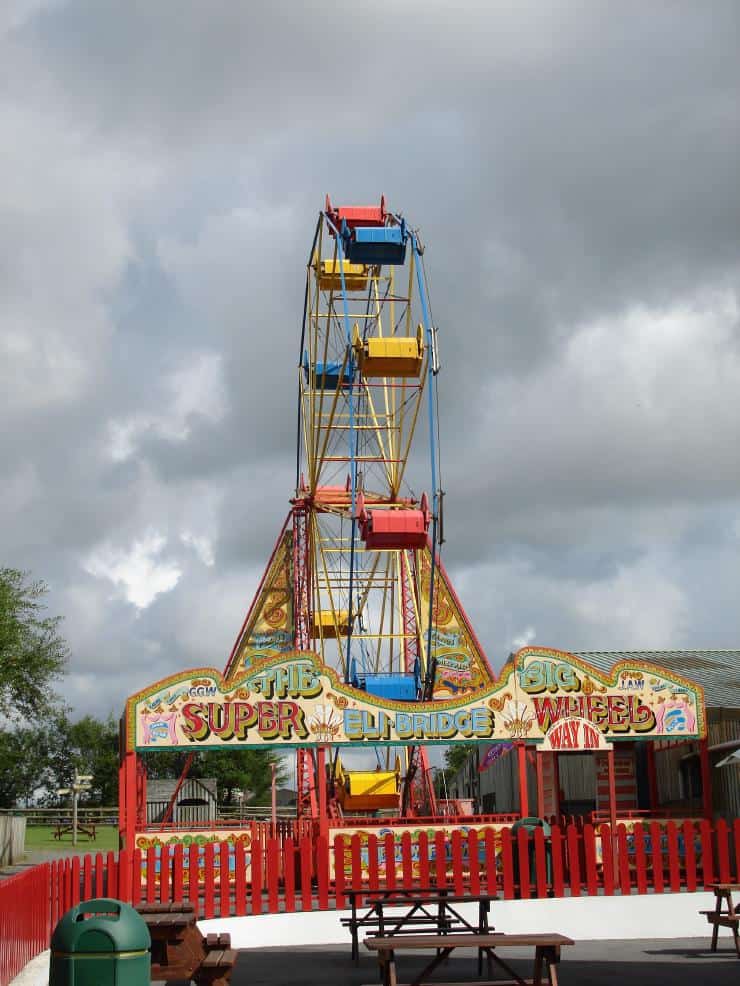 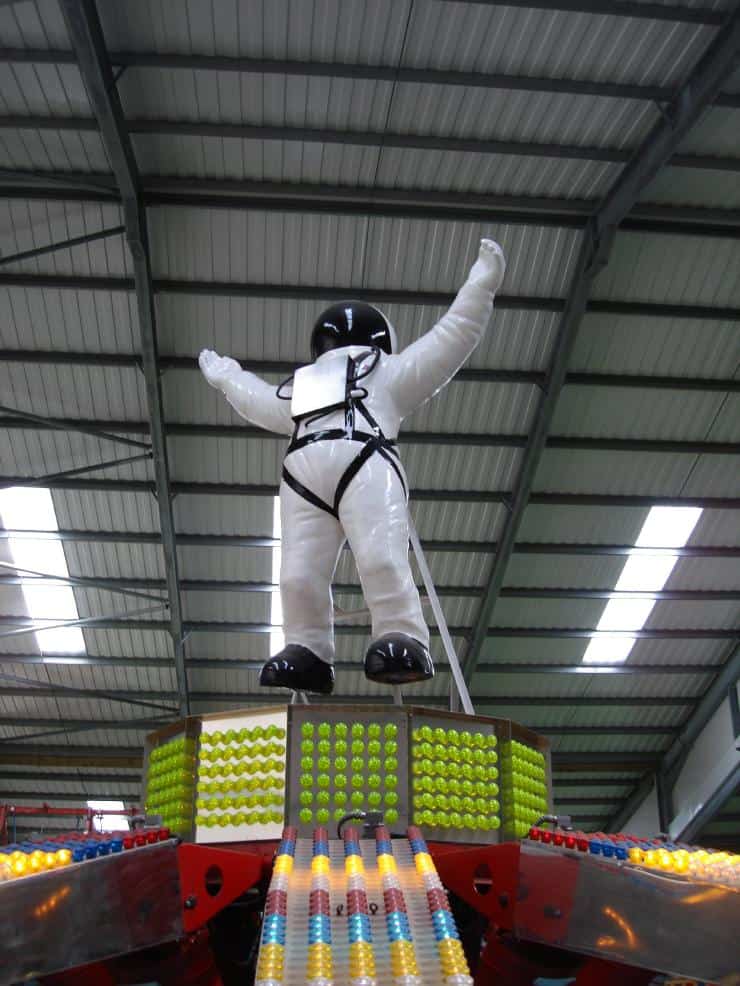 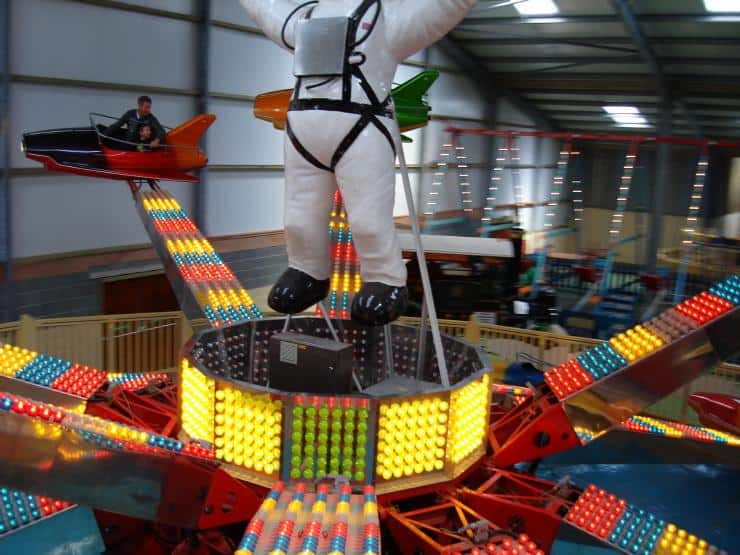 I dont remember them going that high

Camper than a row of tents, but great fun

I loved these as a child 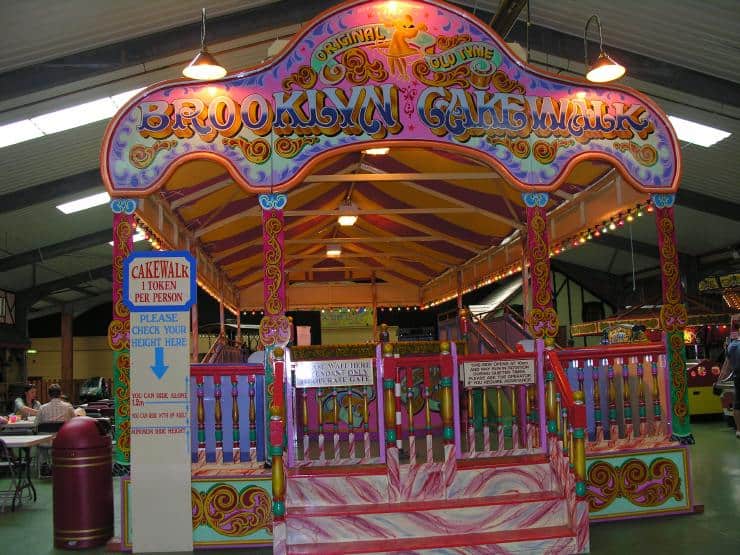 Cakewalk, Stuning, the colours on this ride are outstanding 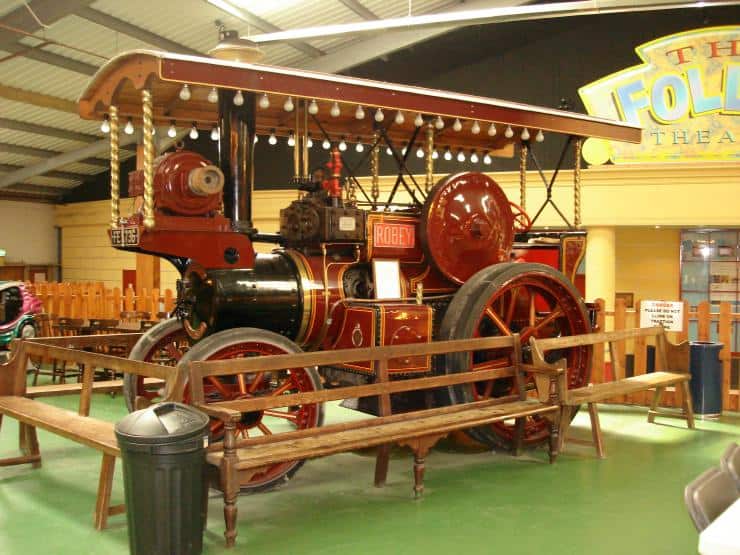 Mr Dibnah would have loved this. 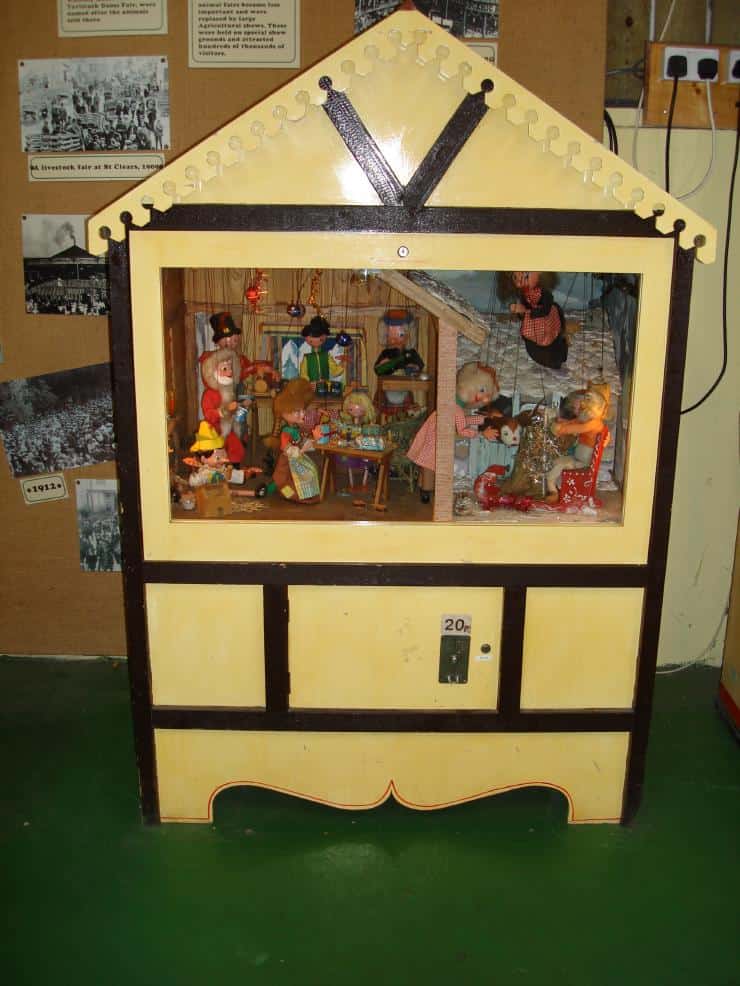 I remember when this was 10p 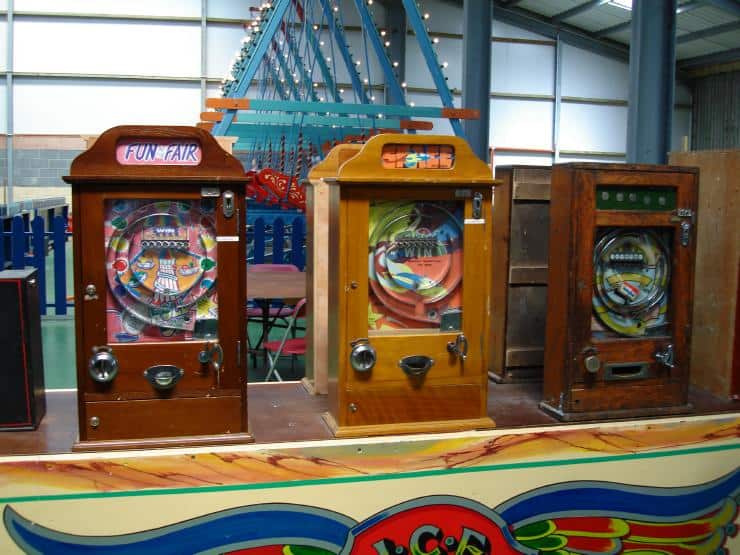 loads of slot machines in the fun fair and the majority are still working.

If you enjoyed these pictures I have quite a few more on the ridemad.com gallery

If you want any photos please get in touch, dont steal them, I purposely didnt watermark these so you wouldnt have the web site name all over them, i have High resolution versions of all the photographs and will be more than happy to share. please contact me at paul@ridemad.com