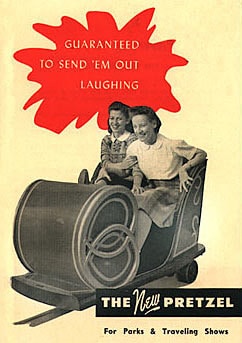 Information and photographs compiled by Bill Luca and George LaCross of http://www.laffinthedark.com

1928: The single-rail dark ride is invented 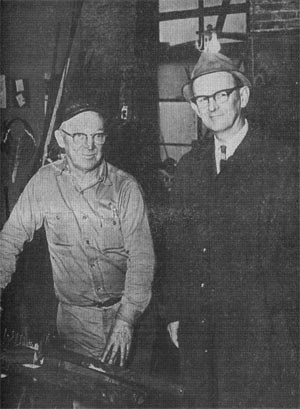 The partners made many additions to the park and one of the attractions that they felt the park needed was an Old Mill, a very popular ride that debuted in 1900 with boats floating through a cavern of darkness with either eerie or historic dioramas. Since an installation of an Old Mill wasn’t economically feasible for their park, Cassidy and Rempfer began looking for a cheaper alternative and started tinkering with a spare Dodgem car. Soon they had a “dry” version of the mill which took riders through a darkened pavilion in small cars that followed a single electrified track. It premiered in 1928.

Cassidy and Rempfer vigorously promoted the new and as yet unnamed ride, and decided to hold a contest to allow the public to choose what the ride would be called. They proclaimed that on Memorial Day the new name would be chosen from entries submitted by park patrons. A $5 gold piece would be awarded to the winner, provided he or she was present in the park at the time the name was announced.

A young Miriam Dawson took the golden prize for her name, “The Firefly”, inspired by the characteristic sparking of the electric pickup at the rail. The name didn’t stick, though. Cassidy and Rempfer were uncomfortable with the association of sparks with wooden buildings, and soon assigned the name “Pretzel” to the attraction after a rider exclaimed that he felt like he’d been bent into a pretzel by the twisting path followed by the car.

With the success of their new ride and the interest shown by other park owners, Cassidy and Rempfer quickly established a company to manufacture and market the Pretzel ride. Initially built to resemble Model A Fords, the cars were redesigned with the familiar pretzel-shaped decorations.

Each 40-pound iron pretzel casting also served to add weight to the nose of the car to help keep the front wheel from jumping the track. The new 20-gauge sheet metal cars had a tapered shape similar to the touring pushcarts that were popular on the Coney Island and Atlantic City boardwalks. This car would remain the company’s single standard rolling stock almost until World War II.

The Pretzel Ride took the amusement business by storm. Routinely outgrossing all other rides on the midway, Pretzels were rapidly being installed in nearly every fun park in the nation, and foreign countries were also asking for them. Leon Cassidy purchased an abandoned trolley barn on South Avenue in Bridgeton to use as the main factory. A standard Pretzel ride in 1929 had five cars, 350 feet of track and gave a ride of one and a half minutes in duration. Purchase price was $1,200.

From the beginning, right up through the late forties, Pretzel was using ‘car-powered’ stunts; hinged cast-iron bars set into the floor and positioned so that the car wheels would roll over them, throwing a linkage to cause a devil’s head to pop up, or the emergence of “Al E. Gator” from his barrel just ahead of the passengers. No motors, no relays, no air cylinders… low-tech.

They would use similar means to trip the noise makers, gadgets that would set up such a racket that riders would think the car had knocked over a trash barrel.

The Traver Engineering Company of Beaver Falls, Pennsylvania, headed by legendary coaster designer Harry Traver, wanted a piece of the dark ride action and began marketing its own dark ride under the name “Laff In The Dark.” Traver’s dark ride was a lower-cost version with wooden cars, targeted at budget-minded parks. This ride employed dual trackwheels and positioned the hot rail on the floor aside the main steering track in an attempt to skirt the Pretzel patent. Leon Cassidy initially considered suing Traver for infringement, but ultimately decided, rightly, that the competition would be too insignificant to warrant the expense of litigation.

Traver apparently entered a contractual agreement with comic strip syndicates, as many of his stunts were plywood cutouts of comic strip characters including Popeye and Maggie and Jigs. A Traver installation would also include a plywood cutout mule that would kick at passing riders as well as two alley cats that would engage in a face-off.

By 1932, Traver was broke and his chief engineer Ralph Chambers purchased the Beaver Falls firm. Traver and Chambers failed to surpass the sales of Pretzel dark ride installations. but they still made quite a legacy for themselves. Many of the former Laff In The Dark rides are fondly remembered including a larger than usual model installed at Crystal Beach Amusement Park on the shores of Lake Eerie, Canada. That park closed in 1989. The only remnant of a Chambers Laff In The Dark is the Zombie Castle dark ride at Playland Park in Rye, New York. Originally a 1930s Chambers Laff In The Dark installation, it received a complete overhaul in 2001 although the ride’s newer cars still use undercarriage hardware salvaged from the original Chambers cars.

It’s interesting to note that neither Traver or Chambers obtained a trademark on the Laff In The Dark name as a number of Pretzel dark rides were either installed with that name or renamed Laff In the Dark over the years.

After a hiatus during the years of World War II, the Pretzel Amusement Ride Company reopened under the leadership of Leon’s son William Cassidy. The company soon expanded its operation to include different types of kiddie rides, although the dark ride was Pretzel’s signature ride. In 1953, Pretzel introduced its spinning dark ride car. The car was fashioned in an oval shape with a high, heart-shaped upholstered seat back. Riders sat facing outward toward the side rather than forward. Once inside the ride, a floor trip unlocked the passenger unit, which was mounted on a spindle, independent of the chassis. The riders were then rotated alternately clockwise and counterclockwise as the car traced the usual labyrinthine path. The longest dark ride employing a fleet of Pretzel spinners was Coney Islandís Spook-A-Rama in Brooklyn, New York. This encompassed two buildings and sections of outdoor track. 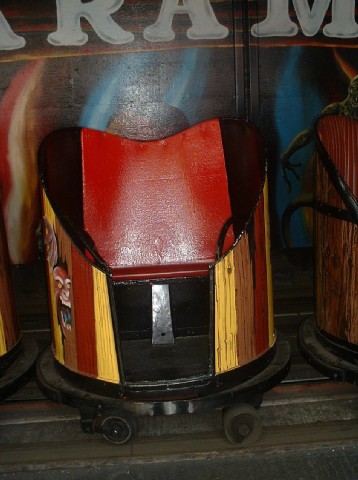 Spook-A-Rama is still in operation although the ride has been downsized to the larger of the two buildings, and the Pretzel cars have been dead-bolted to keep them from spinning. But Spook-A-Rama remains to this day, a great example of the golden era of dark rides.

Some stills from Spook-A-Rama. 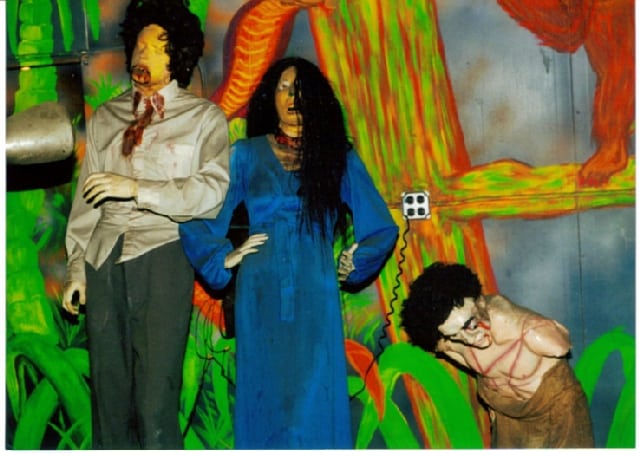 In the late 1950s Pretzel developed the “Double Decker”, a two-level ride in which the cars were hoisted to the second story by a lift chain.

William Cassidy sold the rights to build the rides in 1979.

Animated Display Creators (ADC). A company founded in 1938 by Van Olkon, was best known for its lifelike point of purchase displays in stores and trade venues. Entering the 1950’s, advertising budgets were being directed away from window displays and toward the new promotional medium of television. So, ADC turned to creating ghoulish stunts and displays for dark rides. 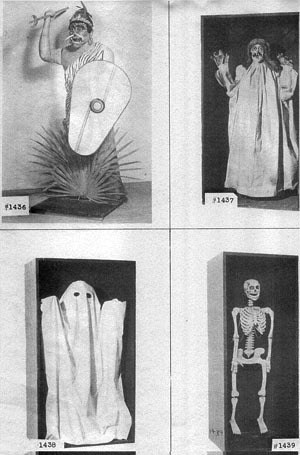 While it did not design or install dark rides, ADC played in an important role in the dark ride legacy by virtue of the variety of pieces it created. Its figures could be purchased to redecorate facades or be used to supplement the stunt line-up in a dark ride. One of the best examples of this was the 1954 installation of the Pretzel dark ride Laffland at Sylvan Beach Amusement Park in central New York State. The ride came with standard-issue Pretzel stunts such as Al-E-Gator and the Jersey Devil, but the park’s owner also bought and installed four ADC-designed stunts. With ADC’s products, park owners could either re-theme or spice up their dark rides, hence keeping them running for years to come.

Bill Tracy, who by most accounts began his career as a window display art director and designer, entered the dark ride game later in life. But he breathed new life into the industry with his gruesome and sometimes politically incorrect displays.

Tracy had at least three different offices and work complexes though his career but the most famous and most productive was in Cape May, New Jersey where he operated the Outdoor Dimensional Display Company. Tracy’s team was responsible for not only designing new dark rides and fun houses in the 1960s and into the mid-1970s, but rethemeing existing Pretzel dark rides and other venues such as Old Mills and Mill Chute rides. For his ride cars, Tracy supplied a model known as Hush Puppies although he also subbed out rolling stock work to the Alan Herschell Company.

Tracy’s stunts were shocking even by todays standards a woman getting sliced in half by a table saw and a man getting flushed down a toilet. One of Tracys best surviving works is the Haunted House at Trimper’s Rides & Amusements, Ocean City, Maryland.

I would like to thank Bill and George for providing all the text and pictures for this article. If you would like to learn more about dark rides take a look at the http://www.laffinthedark.com