For the past few years all we have been hearing is bad news about Noahs Ark, will it get pulled down to create way for the parks new entrance or not ??. Will it be moved, well you only have to ask the Kennywood management what happens when you try to lift an ark, the result left them having to rebuild most of theirs.

It seems the question is still on the board room table as for the past couple of years the management at the park have invested some time and money on the ark, if only cosmetically. The result is a clean, attractive and very enjoyable attraction, Im sure you will agree for 85yrs old its not looking to bad.

Some background on the Ark.

The Ark was built during the winter of 1921 and was open in time for the easter holidays in 1922, the Ark was built by american William Homer Strickler and was one of approximately 50 or more arks installed around the world (well US and UK)

The Blackpool Ark has been through a number of changes over the years, I wont detail everything for a complete history read the Article I wrote but a brief overview of the changes.

1930’s
Local artist Walter Bernasconi retouched some of the original animals and the top half of the ark was rebuilt with some retouching of Mt Ararat. A few additional animals were added to the ark.

1936/37 The change to a cubist design.
Joseph Emberton the famous artchitect responsible for designs like the Grand National station, Funhouse, Ghost Train and the Casino building to name but a few enlisted the help of Percy Metcalfe to change the ark over to a cubist modern design.

1960/61 The ark changes back to the more conventional shape.
In the 1960’s the ark changed from the cubist design to look more like it does today, Sheila Hotchkiss was taken on to make/mould allot of the animals we see today, mainly out of fibreglass.

1995 The building of a new entrance.
In 1995 the park made way for a much improved entrance way and Douglas Sills was charged with designing the changes most of which we see today.

The ark in 2007.
Ok firstly allot of the current colour scheme was done last season, the park had some local painters come in an retouch allot of the animals including Noah, the policeman and Mt Ararat.

A few of the animals were missed out and allot of us enthusiasts thought that was it. However the park continued with the changes in 2007 as they were really needed. The ark has looked a mess for a few seasons, the chipped and flaking paintwork a tribute to the blackpool weather.

May 2007 the scaffolding is in place around the Ark, Dinosaur and Rhino.

The Painted Ark and the removal of the mist tunnels

The first thing to notice for 2007 apart from the obvious cosmetic changes are the removal of the mist tunnels just before you enter the lillies. I was talking to a couple of people at the park about this and the removal was as a result of some younger children been scared by the mist, on a cold day it was especially disorientating.

Something you dont see very often is the water emptied out of the Arks tray. 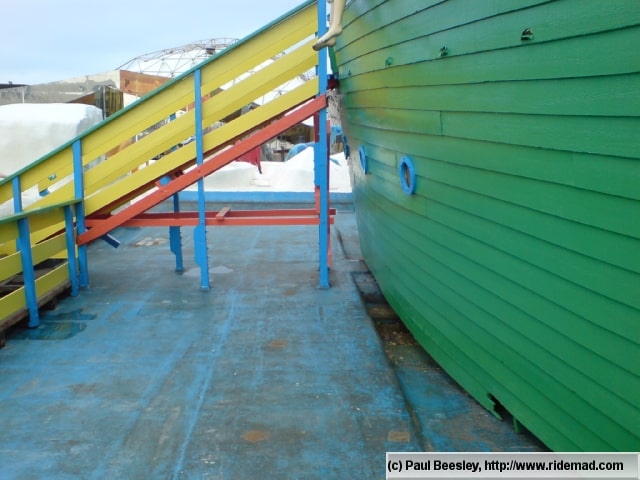 The leopard meeting you at the start of the lillys 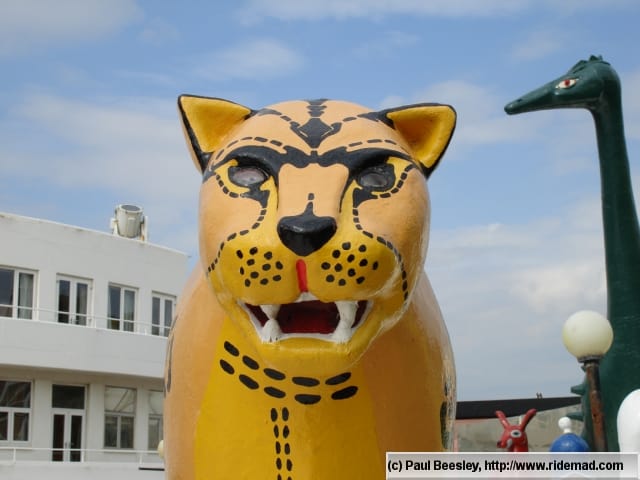 A couple of characters are missing from the deck of the Ark Noahs wife and an animal, presumably gone for painting in one of the paint shops.

Some more of the animals. 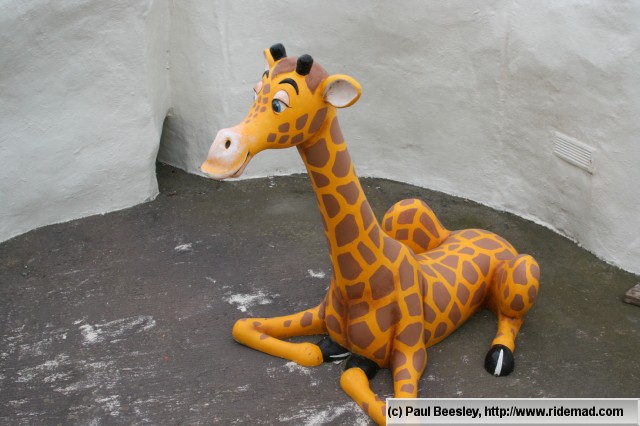 The Stork before and after. 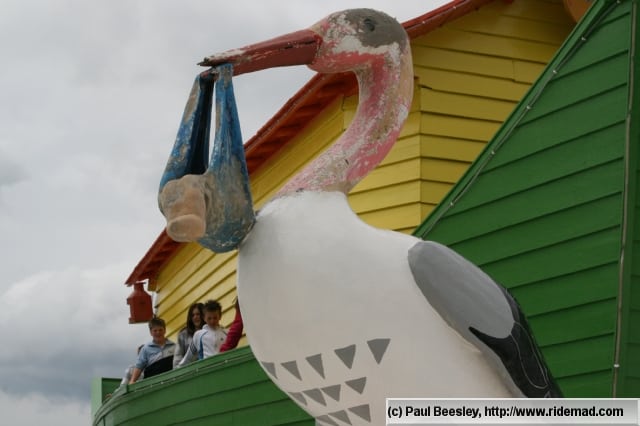 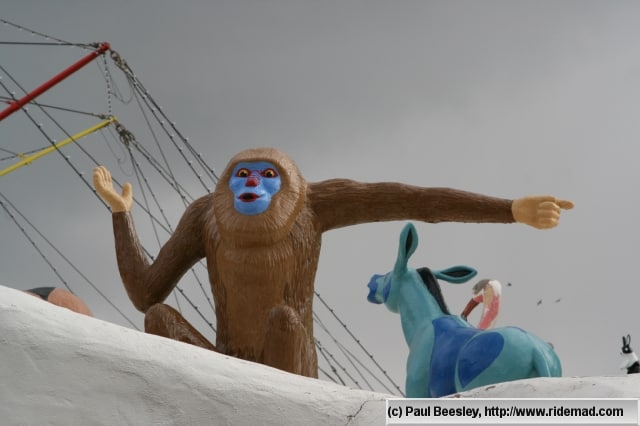 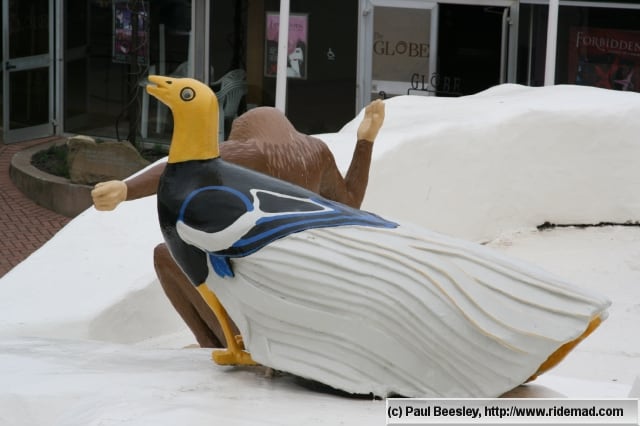 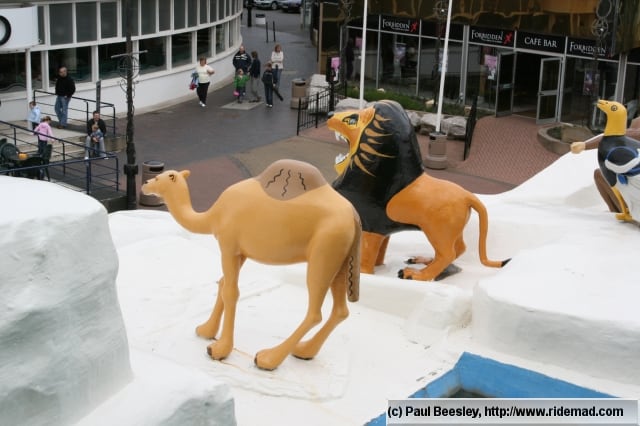 Some general views of the freshly painted Ark. 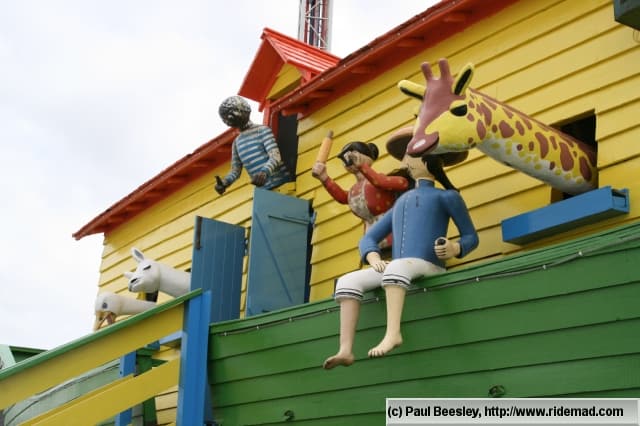 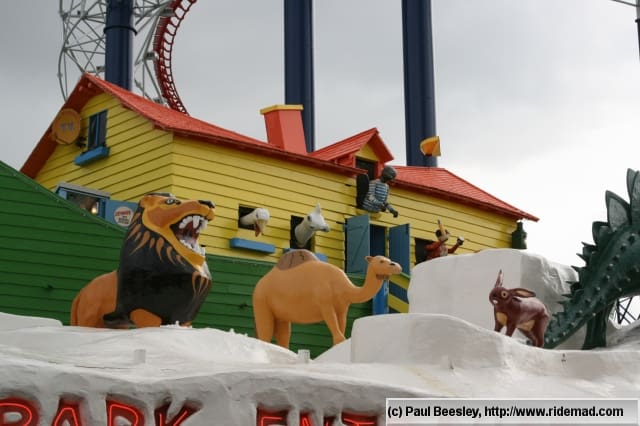 If you want to use any photographs on this blog please get in touch via the contact form im quite happy to share and have high resolution copies of everything used, to see the complete gallery visit the Ridemad Gallery